I just finished reading the Illusion of Life- the book about animation by Disney animators Frank Thomas and Ollie Johnston. Like you might expect, there’s a lot of talk in it about the difficulty of animation. Even basic actions like how a character should walk are time consuming to develop- sometimes taking months of research. When a difficult kind of animation is mentioned, the authors like to bring up less labour intensive ways to achieve the same effect. There’s even a splash page dedicated to time and cost saving measures.

It reminded me of why anime has little chance of feeling the same as Disney’s animation. There’s so much detail in Disney’s character acting. There’s 3-Dimensionality in the figures; convincing portrayals of weight; creative ways of showing emotion; attention paid to the timing of expressions so they transition into each other smoothly; secondary action in the clothing; smart staging; lip syncing- the list goes on.

This isn’t to say Disney is the best at character acting. But, given how quickly anime has to be produced, it feels like there’s no way that the detailed character movements seen in Disney’s works can be replicated in anime.

There have been anime that have tried to replicate Disney-like character acting like Little Witch Academia or FLCL. And high budget anime movies like Metropolis can afford to have more attention paid to each shot. But their approach to animation is completely different. Metropolis, for example, looks beautiful, but this is mainly due to the designs and effects animation rather than the character acting.

The effects and camera work in these shots from Metropolis are more focal than the character animation.

But I think Japan is good at getting across complicated ideas in simple forms. There’s just something about expression in anime that isn’t found much in Western works. Mark Henn’s (?) animation of Simba in these shots is impressive. There’s a strong sense of weight, especially in Mufasa’s limp body; smooth follow through animation in Simba’s tuft of hair and ears; convincing animal movement; and thoughtful secondary actions (notice how Simba’s tail, ears and stance shift to emphasise his emotions).

But these shots from Grave of the Fireflies are more visceral in my opinion. I feel the emotion they’re trying to get across more strongly. I think the animator was able to put more emotion in less frames here.

I think it might be because there’s so little else going on in the Grave of the Fireflies shot. The staging, background and animation itself are minimal, only there to frame the acting. That single action of Setsuko turning away from the camera is simple, but says a lot. The Lion King shot might be more technically impressive, but I think all the movement distracts from the emotion a bit. Emotions might be more strongly felt with less movement.

Of course, you could argue that Simba running around, looking for someone to help, works because it’s in line with his innocent character. On the other hand, maybe the Grave of the Fireflies shot isn’t as sad if you don’t know the context. But either way, I think the approaches to the acting in both shots are effective for different reasons.

Not all character acting is dramatic either. Character acting can be used to bring across personality or comedy like in shots like these. But even in these cuts, I think that there’s a focus on simple movements in anime shots and complicated actions in Western ones.

There’s also something wrong with acting like the only kind of Western animation that matters comes from Disney. I think articles like this one kind of advance the narrative that Disney has the monopoly on animation in the West and they undersell the importance of people like Tissa David, Rod Scribner or Bill Littlejohn- who developed styles of animation independantly of Disney. But I think it’s interesting to compare the effects these different approaches to character acting have. I’d like to talk more about lesser known animators in the future.

The next short article I post will be about excerpts from The Illusion of Life. So, the bi-daily blog post idea didn’t work out. Other work caught up with me and I realised that writing a post every 2 days isn’t realistic for me just now. Part of the reason I started these regular posts was to get a feel of what I’m able to do on this blog so I’ve decided to make this series come out once a week instead of every two days.

This week’s post is a bit shorter, it’s mostly an add-on to the last article. I’d only planned to write a couple hundred words for these and the last one I did was 3000 so I have to tone it down a bit.

But either way enjoy, and hopefully the extra song, images and clips will make up for a shorter article.

END_OF_DOCUMENT_TOKEN_TO_BE_REPLACED Sakuga MADs are animation highlight reels, made to collect, celebrate and appreciate the work of animators. There can also be craft put into the making of these MADs themselves as they can give the viewer a way to experience animation they may have seen many times before in a new light. Good MADs highlight the effort that goes into animation and can make you look at a body of work in a different light.

I thought it could be interesting to talk about how I make my videos, some editing techniques that are common in Sakuga MADs and what, I think, makes a good Sakuga MAD.

END_OF_DOCUMENT_TOKEN_TO_BE_REPLACED 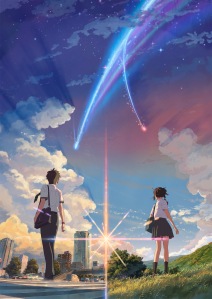 “Good animators can make a good story a knockout. There is not much that the best animators can do with bad stories”- Walt Disney

Anime has the potential to give us unique experiences. Japan’s animation industry is filled with culture and perspectives that are missing from Western films. However, this culture is too often used as fancy dress on familiar archetypes. Many popular anime tropes simply show or sometimes celebrate ugly sides of human nature as opposed to exploring them. This is part of what makes anime directors like Hayao Miyazaki or Mamoru Hosoda good. Their films are full of rich meaning and they often subvert and scrutinise harmful anime tropes. This context makes Makoto Shinkai’s Your Name disappointing. Shinkai’s film is technically excellent but severely lacking in meaning and humanity. Pretty visuals are its key focus and are meant to distract from its hollowness. It’s not an awful film, but it’s not a very good one.